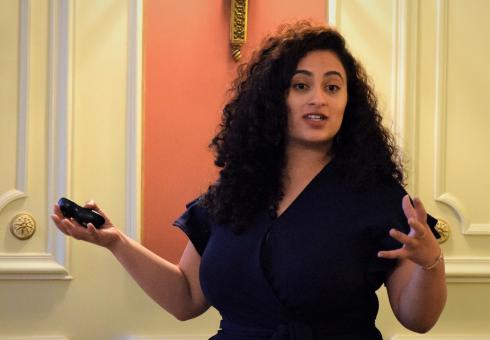 Each year, Graduate Liberal Studies at Duke acknowledges a few extraordinary master’s projects and honors their creators. GLS chose the term, “Exemplary Master’s Project” to indicate that these carefully chosen projects represent the highest standards in interdisciplinary research and writing, whether they pursue traditional academic methods or articulate original and innovative new approaches.

This year, eight graduates were awarded the distinction of Exemplary Master's Project. A celebration featuring presentations by four of this year's awardees will be held on Thursday, May 9, in the East Duke Parlors, beginning at 6 p.m. RSVP to dukegls@duke.edu by 5 p.m. on Tuesday, May 7.

The recipients are listed below in alphabetical order.

Muslim-led Groups in the Triangle of North Carolina: A Social Network Analysis

Inspired by the Cinema of Michelangelo Antonioni

The Rebirth of a Medieval Pilgrimage Route: A Study of the

Robinson Crusoe as Promotion Literature: The Reality of

St. Wilfrid’s Church: Fragments of the Soul of an Urban Church

Who am I in English? Language as the Face of Identity in Bilingual Individuals

Yes, “All Students Can be Taught How to be Smart”: How Anti-Bias

Can Eradicate the Achievement Gap

Confession, Sexuality, and Desire in the Decameron