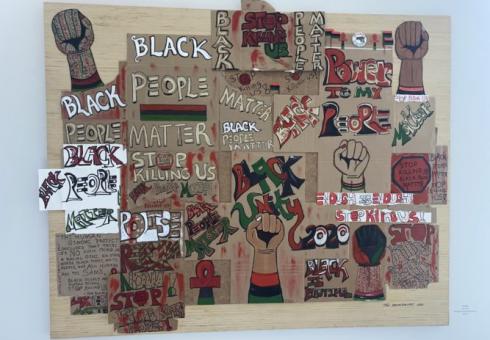 From the Port City Daily:

Durham artist Toya Wallace, a student at Duke, submitted “Wall of Protest.” Created out of recycled boxes and paper, the piece features hand-drawn clenched fists raised in objection, alongside words like “Stop Killing Us” and “Black People Matter.” Individual, smaller signs were mashed together as one piece.

​​Wallace was inspired by the viral videos of George Floyd’s last minutes. She said his death conjured memories of numerous other Black men and women who were victims of police brutality, despite being unarmed.

“It is important for artists to use our platform to speak out against any injustice that we see in our communities and in communities worldwide,” she said.

Wallace pointed to statistics revealed by the organization Mapping Police Violence, showing 1,136 people were killed by officers in 2021; 23% were Black people, which make up less than 13% of the national population.

“Something must be done,” Wallace explained. “I hope that my artwork will make viewers realize that Black people are human beings and should not be allowed to be used as shooting targets.”